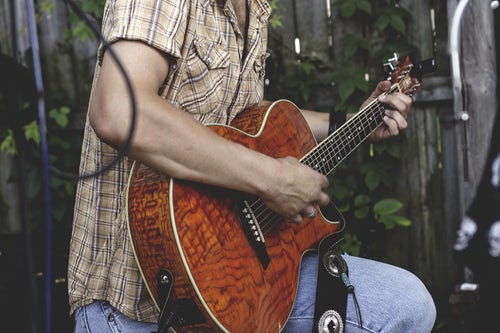 Back in 2017 we decided to bring country music to Europe. There is a growing popularity of our genre of music in Europe thanks to film, TV….and Taylor Swift. Thanks Taylor. On our 3 month tour we will play to crowds in Ireland, England, France, Spain, Germany, The Netherlands, Italy and many more. We promised our fans we would document our travels via vlogs on our Youtube channel. However we also thought we would treat you all to blog posts as well. This blog post will be dedicated to the beautiful country of Scotland – where we kicked off the tour. Thankfully this blog is sponsored by window blinds company Glasgow, Casa Blinds.

Our opening night was a success! We were so thankful to get such a great response from the Edinburgh crowd so – THANK YOU! We were excited to visit Edinburgh for the bagpipes, haggis and famous castle. Edinburgh castle is a must see if you’re ever in town – the history is almost unbelievable – very very cool. Haggis is delicious. That’s all there is so say about that. We tried Irn- Bru which is a fizzy orange soft drink – being American this was very similar to the utter trash we are used to. But yes, it was delicious and a life saver on a hangover by the way. All in all – Edinburgh was a success and we are looking forward to returning one day.

We were lucky to play to a beautiful crowd in world famous venue – King Tuts (apparently Oasis were discovered here). Glasgow took us by surprise. When you think of Scotland you think of miles of mountains and old castles. Actually Glasgow was ‘sound’ (apparently this means cool in Scottish slang). It wasn’t raining and it wasn’t that cold either – result! We met some really friendly and funny people everywhere we went! There was a large pink sign right in the city centre that read ‘People Make Glasgow’ – and they really do. Random passers by in the street told us all the great bars and restaurants to go to and most were even keen on coming to our gig in King Tuts Wah Wah Hut (haha what a name). If anyone asks – we would definitely recommend Glasgow for a ‘great night out’. The people are awesome, the bars, clubs and restaurants are great and the city is so much fun! The music scene is Glasgow is one of the best in the UK, never mind Scotland and there is lots to do in terms of day time activities – walks in the parks, food festivals…The ‘West End’ is a must for quirky coffee shops and cool activities. Don’t tell anyone but we much prefer Glasgow to Edinburgh.

Our first tour break took place after our Glasgow gig – we had 3 days to chill and explore before hitting up Belfast in Ireland. We decided we had seen all there is to see with Scotland’s biggest cities and took a drive up to the highlands.

The beaches, the mountains, the rivers, the ‘lochs’. This has to be one of the most pure, clean and amazing places we have EVER been to visit. Although it was a little chilly we were lucky to experience the glorious highlands in the sunshine. We spent 3 days hiking up the mountains, exploring the sandy coast and meeting the locals in the local pubs. We were shocked to find nobody was wearing kilts, screaming ‘FREEDOM’ at the top of their lungs and living in castles but living normally like the rest of the world. How narrow minded are we eh?! Again we would highly, highly recommend a holiday or weekend break in Scotland – because the country in so small you can easily get around by car and the public transport services are top notch with regular trains and busses going everywhere. – Thanks to Window Blinds Glasgow for making all this possible!

Now we are looking forward to getting the ferry across to Ireland for the next leg of our tour. Bring on the Guinness, YE-HA!